by James Tadd Adcox
(an excerpt from his debut novel, Does Not Love, now available from Curbside Splendor Publishing.)

Viola and the FBI agent have dinner at a sushi restaurant on the near west side. The FBI agent is saying goodbye to a friend of his, a white-haired but healthy older gentleman who is retiring from his post as judge. He had presided for more than a decade over one of the most prestigious of the secret courts.

“Many people believe that today’s secret courts, the ones that deal with Terror, are the only secret courts there have ever been,” he says. “But there are other courts, much older, much more secret, that deal with, for example, matters of the heart.”

“Well, I can’t go into any detail, really,” the judge says.

They order a round of plum wine. It’s stronger than Viola was expecting. They order another. Music is playing in the background, a cover of “Volare” using traditional Japanese instruments. The judge recognizes the band. He’s been interested in their work for some time, and he talks about it, a little.

“I don’t really like music anymore,” Viola says. “All of the music I used to like has too many feelings attached to it.” She looks down at her nigiri and worries that that was a stupid thing to say. She worries that the white-haired judge will think she’s a sad sack. After a moment she says, to clarify, “Not necessarily bad feelings.” The judge nods at this, and Viola suddenly gets the idea that he’s very understanding about how people can be overwhelmed, listening to music they used to like. Perhaps he’s just very understanding in general. Viola looks at his hands. He has very sensitive, wise-looking hands. The FBI agent’s hands look sensitive, but they don’t look wise. They look something like a little boy’s hands. The judge’s hands are broader, more masculine, with red knuckles and wiry silver hairs. They make her think of the protagonist’s friend in Crime and Punishment, who was big but very understanding of others; she can’t remember his name, just now.

“What do you plan to do once you retire?” Viola says.

“I am retiring to study the secret body of case law,” the judge says. “The secret courts operate on a hierarchy of secrecy,” he explains. “For most of my career, I thought that I was presiding over the most secret court. Each court believes that, that it’s the most secret. Which is absurd, of course. There’s always a more secret court. I know that now.”

“Are you looking forward to spending more time with them?”

The FBI agent and the judge talk about certain aspects of the secret body of case law. “A particularly interesting case is when a court at one level of secrecy learns of the existence of a court at a higher level of secrecy,” the judge says. “Such cases function, mathematically, you might say, to create a series of imaginary or ‘shadow’ courts. Say for instance that court d learns of the existence of court c, which until that point had been operating at a higher level of secrecy. The court that had been court d, then, is no longer court d, rather now it is some other court, operating at a higher level of secrecy than court c. Call it court b. So court b now knows about court c, and court c still knows about court d. But what does court c know if it knows court d? It knows about a court which no longer exists—a court which is like court b in every respect except for one (and that one is precisely the most crucial): court b is a level of secrecy above court c, court d is not. Court d is therefore a shadow court, cast by court b. Each of them operates at its own level of secrecy within the hierarchy, and though their actions, to an outside observer—say, court a—appear the same in all respects, the meanings of those actions are radically different.”

The judge draws a diagram on a napkin: 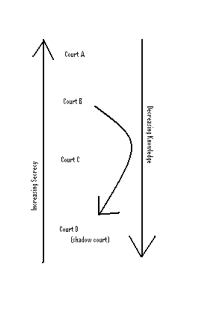 “Ultimately, the law is pure form, devoid of content,” the judge tells the FBI agent. “What we are fighting for is not a thing, but a shape.”

A little later, the judge says: “My wife has not been very understanding. We’ve had some problems. We had two kids, boys, but neither of them lives in Indiana anymore. I think one of them moved to Seattle? He was a designer. Web designer. We’re not really in touch anymore. I think they both secretly call my wife, that they stay in touch with her and tell her about their lives and so forth. She won’t talk to me about it.”

“That sounds horrible,” Viola says, putting her hand on his hand.

“She says I lost my chance with them a long time ago,” the judge says. Viola notices the FBI agent staring at her hand on the judge’s hand.

“Listen to me,” the judge says. “Going on like this. We’re celebrating, aren’t we?”

The judge orders a round of sake on the rocks for the table. “A thing a lot of people don’t realize about sake is that it’s a very versatile drink,” he says. The FBI agent and Viola and the judge toast to the judge’s future, and then they toast to the FBI agent’s future and Viola’s future. “You kids,” the judge says. “You fucking kids.” The judge orders another round for the three of them and gets his money out and puts it on the table.

“You’re not paying for this,” the FBI agent says. “We’re taking you out, remember?”

“I’m paying for whatever the hell I want to,” the judge says. “It’s my money and I want to spend it.” He toasts again to Viola and the FBI agent. “You fucking kids,” he says. “I bet you kids have some kind of fun together, don’t you?” The judge is holding Viola’s hand in both of his.

“We should drive him home,” Viola says to the FBI agent, a little while later. “He’s in no condition.”

“I’m staying at a hotel,” the judge says.

“Which hotel?” He tells them.

Viola and the judge follow the FBI agent out to the FBI agent’s car. The judge walks with Viola’s arm in his. He pats her arm. He keeps saying what a wonderful night he is having and how lovely it has been to meet her. “Put him in the front,” the FBI agent says.

“That’s not very gentlemanly,” the judge says, but allows Viola to help him into the front seat anyhow.

At the hotel the FBI agent parks and they stand before the sliding glass doors to the hotel lobby while the judge says goodnight.

“Do you mind seeing an older gentleman up to his room?” the judge says. Viola looks at the FBI agent.

“Sure, see him up,” the FBI agent says. “Do whatever the hell you’re going to.”

In the hotel room, which is much nicer than the room that the FBI agent is staying in, the judge respectfully embraces Viola. Viola nuzzles into the judge’s neck. He’s in very good shape. She can feel how good of shape he’s in, in the muscles in the arms with which the judge is respectfully and gently embracing her. She asks the judge how often he takes young women up to hotel rooms with him.

“I enjoy the occasional guest,” the judge says. “I try to be appropriate, you know.”

The judge can’t get a hardon. It’s only half-there. He’s very pleasant about it. “Other men I’ve been with aren’t so, you know, accepting when that happens.”

“I’m seventy-six years old,” the judge says, “and I’m in a hotel room with a beautiful young woman. I’m having a wonderful time in any case. My only concern is that you not think it’s any commentary on you.”

“Oh, no,” Viola says. “But I appreciate your concern.”

They sit on the hotel-room bed, the judge in his boxers, Viola readjusting her skirt. “You can spend the night,” the judge says. “I never kick my guests out. Never. It’s out of the question.”

“I can get a taxi,” Viola says. “Really, it’s fine. You’ve been quite the gentleman.”

The FBI agent is still waiting outside the hotel doors when Viola comes back down. Viola realizes, as soon as she sees him, that she’s actually not at all surprised that he waited.

“Why shouldn’t I be jealous?” he says.

“Look, this is an affair,” Viola says, getting in the car. “I have a husband.”

The FBI agent drives through the city towards the motel, where Viola’s car is parked. Viola asks for a cigarette, mostly to break the silence.

“I have proof that you don’t love him,” the FBI agent says. “Photographs, video and audio recordings.”

“And that he doesn’t love you.”

Viola stares out the window at a series of abandoned factories passing by. “He loves me,” she says.

“He doesn’t deserve you.”

“He loves me,” Viola says. “I don’t want to hear you say that he doesn’t love me again. Because it’s not true.”

That night Viola brushes her teeth in the empty house feeling very alone. She tries to think about her situation with the FBI agent and with her husband Robert and about what effect going up to the hotel room with the judge might have had on the situation, but none of her thoughts come in words. She pictures herself asleep under a snowdrift, curled up. It doesn’t seem sad or self-pitying to her. It’s just a very comfortable picture. But of course it’s too late in the year for snow. As she’s brushing her teeth she lists places in her head where it would still be snowing this time of year. Alaska. Some place in Canada. Michigan, Upper-Peninsula. Certain mountaintops in Chile or Argentina. She makes a big production out of smoothing out the bed sheets and turning back the covers. Robert isn’t home yet. Robert doesn’t come back all night. She lies under the covers, staring at the ceiling, until early in the morning, thinking.

James Tadd Adcox is the author of a novel, Does Not Love, and a collection of stories, The Map of the System of Human Knowledge. He lives in Chicago.